On June 30, 2021 г. Sofia Energy Agency SOFENA, together with Energomonitor Bulgaria, organised training for energy supporters as part of the PowerPoor project at the Vocational School of Electronics and Automation.

The training was held as part of the extracurricular activities at the end of the school year, it was attended by over 60 students from the last grades and some of their teachers. The training was structured as a series of lectures related to: introducing the PowerPoor project; the notion “energy poverty”, a map of energy poverty in Europe; EU policies aimed at mitigating energy poverty; household energy performance; simple energy efficiency measures and practical tips; collective innovative action tackling energy poverty; collective energy initiatives; innovative financing of energy initiatives, crowdfunding.

The Energomonitor Bulgaria team introduced the audience to the opportunities for energy saving in households by using the innovative real-time energy monitoring system Energomonitor, as a soft measure in tackling energy poverty. 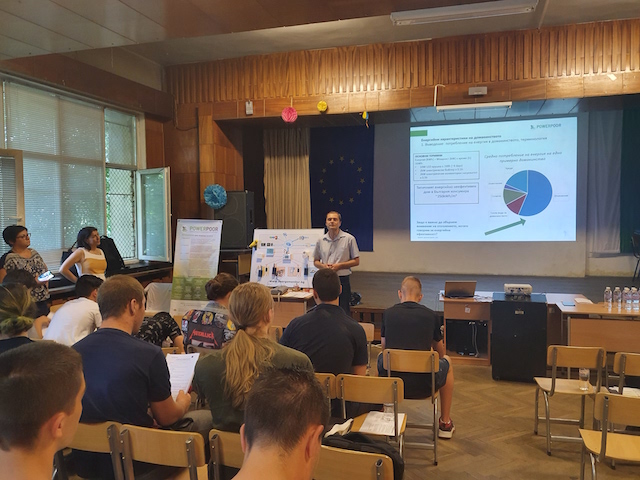 The training ended with a certification test for energy supporters and 56 students past the test successfully and received certificates for energy supporters. All supporters received PowerPoor brochures and T-shirts with the project’s logo. In order to facilitate future surveys and to raise awareness among households, three Energomonitor electricity monitoring kits were donated to the school.

The PowerPoor project envisages the creation of a national network of certified energy supporters and mentors of energy communities, whose activities will be coordinated by several energy offices, as well as by local municipalities. As a result of the activities of these supporters / mentors to inform and support the energy poor, citizens are positioned at the heart of the solution through a gradual transition from an energy poor citizen towards an informed consumer and later an active prosumer.